I'm so excited. The tickets for my first festival arrived this morning. I missed doing the whole wellies and muddy field thing when I was younger, far too sensible and settled down as the little woman, but that's another story for another time. So what with Mike not knowing when the number 90 bus is coming through our door and me having had a deprived and definitely not depraved youth (oh the regrets) we decided that this year a few days in a muddy field in Cumbria were needed.

We found out a week ago that the Saturday is fancy dress. Mike thought he might go as Tina, but I soon vetoed that idea as his legs are better than mine and I'm fed up of him getting the compliments. Funnily enough we were asked yesterday by Dr SB who was going to be the bride and who the groom!!!! Bloomin' cheek. So I came up with what I think is a brilliant idea and I'm going to make us some costumes. Yes, I'm going to sew!!!

In true Lorna style, I am keen to make a start, even though I have curtains to finish (yep still sitting waiting to be hemmed), various knitting projects to continue and several small repair jobs, all of which I should really attend to first, but...... Any way I have found the pattern I intend to use courtesy of a young lady called Dixie I have the pattern sitting next to me. It is going to be so cool.

It's really windy here today. Maybe the River God came down from Newcastle with us.

I love Paula and her blog (when she posts on time!) as together they remind me it is time to get out in the garden and take some pics. Yes it's that time again. 21st Century Garden, May edition:

I forgot to mention on my earlier post that today it is someone special's birthday. Yes I know, it's always someone's birthday and they are always special to someone, (I was going to point out that even nasty people have mothers, but given what happened to that Danish director my lips are sealed.) Well today a very, very special person is three years old. So without further ado I would just like to say:


Happy Birthday Toni.
As you can see we bought her a nice new squeaky hedgehog toy: 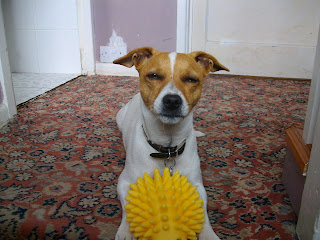 But it didn't last long: 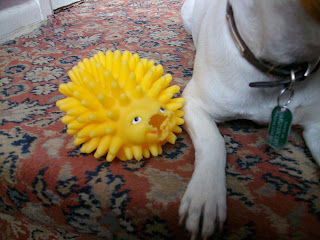 So now I'm off to the kitchen to make her favourite lemon cakes.

I've just been reminded by Ruth that I need to update my progress. I refused to post last week as a protest at losing another paltry half a pound. I was so mad with useless body that I had to give it a good dressing down. So there you have it week 15 a grotty half a pound.


I have to admit that after our adventures up north I was dreading the way-in yesterday. There was far, far too much alcohol on Tuesday, which of course led to a bit of a binge on take away, although in my defence it was a proper chicken shish kebab and salad and I didn't touch the pitta bread. I did however eat the pitta bread with my mezzes on Wednesday and that was after a full English breakfast. All I could do was hope that I would have maintained. Oh while I think about it I can post a couple of photos of the pair of us at the Baltic.
In my defence, when Mike takes my photo he does so with the camera pointing down and I reckon it makes me look dumpy.

I thought I would share our latest great adventure with you all, whether you like it or not. We had been invited by Lesley Roley to attend the recording of her latest album, way up north in Newcastle-upon-Tyne. Having never been there we decided we needed a bit of a break so off on the train we went.

Of course things are never easy for grumpies like us, so when we got on the train to find our reserved seats occupied I just had to say something, well quite alot actually and even though there was an empty seat on the other side of the table, I refused to use it and made the lady sitting in our seats (and I mean she needed both seats!) move into it. Mike just stood and watched me.

Three and a half hours later we were in Geordie land. What a surprise. We had imagined a city very much the same as those found here in the Midlands, we were wrong. Instead we found a place full of history and culture. Let me show you what I mean.


﻿
﻿
That's the history, well some of it. Having arrived just after lunch on Tuesday, we spent the afternoon wandering around the shops before getting a bite to eat and making our way to watch Lesley. 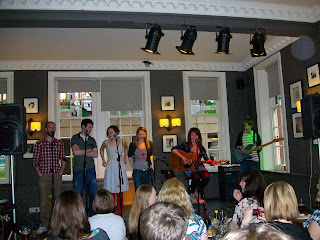 Wednesday was spent crossing bridges, looking at art and checking out the opposition for Sunday. Needless to say, we weren't surprised to find the following at St James' Park:
﻿That's probably enough culture for now. I'll have to bore you with the other 999 photos some other time.
I would like to share a conversation that we had though. We were sitting in the Turkish restaurant we found (we love Turkish food) having finished our meals. After about 20 minutes we were still waiting for the guy we assume was the owner to come back to us and ask about coffee or desserts, you all know the drill. Having been to Turkey a few times, we do know that if they have no-one else in the restaurant they like to keep you there so they look like they have customers. Anyway this is how it went:
Me: Do you think he is holding us hostage?
Mike: He's not holding my ostrich.
Mike's Myeloma deafness strikes again. I laughed so much I needed tissues!

P.S. Blatant advertising here. The fantastic Turkish Restaurant is called Seven Hills and is situated on Sandhill. Just in case anyone stumbles onto the blog and fancies a good meal.
Posted by Lorna A. at 10:06:00 am 4 comments: Links to this post

Yes folks, the grumpy old man is BACK.
Bolstered by the current list of "important things to get done soon", I awoke this bright Sunday morning with a dark foreboding thought that it is only 4 weeks on Tuesday till I tie the knot and there are a few little things we need to get done first, and the builders in the meantime have decided they now need to come and measure up for the new conservatory before they knock the old one down next week ready to buld a new one....... OMG! not much is happening then....... i.e. my not gonna get done if i don't pedal faster....list.

1) Tidy the garage out and make room for the washing machine, tumble dryer , washing baskets and the only willing participant in the "keep everyboby clean and dressed" person....Lorna. (Note: garage not attached to house, so might have a problem if the builders don't get finished before winter!)
2)Concrete behind garage so I can erect a shed for all the extras out of the garage to go in.
3)Sort out the garden after the builders have finnished.
4)Prepare the folding camper ready for our trip up to Cumbria for Solfest Festival.
5) Make enough room in the house for people to be able to walk in and out.
6)Decorate the Lounge, Hall and Stairs  and fit new carpet in the hallway, where the electricians, plumbers and builders hacked out chunks earlier in the year.
7) Fill the Squash bottles.
8)Empty the sunlounge so that it can be demolished.

I think there are lots more things, but I can't think of them just now, and anyway if there is, I would never get them done anyway.
Must remind Lorna to ring the hairdressers tomorrow for her appointment on 14th June 2011, cause she keeps saying something important is happening on that day, and she doesn't want to look a mess.

Hooray, I have a solution to all of this: What gets done, gets done. What I fail to get done doesn't really matter, because I am still here breathing and relatively healthy and at the moment drug-free,and I have more important things to do, like worrying about  my friends and their health and making sure that Lorna's mounting panic about everything gets my full attention, cause she's such a diamond!

Chest feels light as a feather now that that lot is not residing on it.

How are you lot anyway?
xxxx

Another Thursday already. My, where do the weeks go. I only have 39 days until the big day. Don't panic Lorna you'll get it all done. On my to do list is:
I wonder if William and Kate found things so difficult?

And before I forget, this week's loss is a measly half a pound. Well as they say better off than on.
Posted by Lorna A. at 10:11:00 pm 4 comments: Links to this post

Yes it is May Day. I started out with so many plans. I may finally repot my tomatoes and put my snap dragons out in the front garden. I may cook the piece of beef I bought yesterday and make the family a proper Sunday roast. May be I would play my saxaphone for the first time since Mike was diagnosed or may be I would sort out my wardrobe, full of clothes that don't fit for one of two reasons.

So on this bright, sunny and very windy day, what exactly did I achieve? Absolutely none of the above. More of a May Be Not Day.
Posted by Lorna A. at 9:49:00 pm 4 comments: Links to this post