Well folks, it's back to square one xx.
Went to the Q.E. in Birmingham yesterday to an appointment with P.M. and B.C. (the time twins?). It was an appointment I thought, that was to bring the transplant forward a month or so because I was doing "so well". BANG! Jaw hit the floor. Para-proteins back up to 27 ish,( where they were in December, just before my official diagnosis ) and SCT now postponed till Christmas time.
So it is back to the bigger glass of water and the larger needle and the sack of tablets, ( including 10 Dex four times a week ;D), to get rid of the bone pain that has re-emerged and to make sure I am still here when the SCT collection starts.
Lorna is my strength and you and all your support are enough to help me get through this.
ta, Mike xxxxxxxxxxxxxxx
Posted by Mike at 8:50:00 am 7 comments: Links to this post 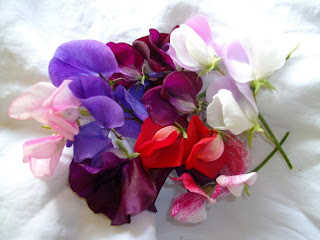 I thought I'd share this year's sweet pea colours with you all. As you can see we even mananged to grow myeloma coloured ones! Oh and the red ones are the same colour as my daughter's hair, which she made me dye about an hour after finishing school for the summer. The reference to cherryade is her's not mine! 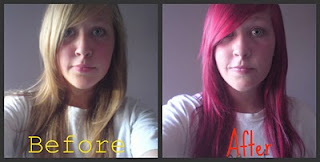 I know, I know, I haven't posted for what feels like forever. I could sit here and give you a load of reasons, but Mike says (ok I say) reasons are really just excuses. A quick resume of how things have been going then. I'm finally starting to feel human again, although the slightest sniff of the food trolley when Mike goes for his Velcade, and I'm ready to vomit for England (sorry anyone who is a bit delicate). Talking of Velcade, Mike has just finished a cycle of Velcade that was half dose once a week, in effect a quarter of the amount in previous cycles. Due to the unplanned break in treatment and possibly the reduced dose of Velcade, Mike's pp have gone from 11 to 16 and so Mike's next cycle will be full dose of Velcade once a week ( which makes it half the original) ready for his SCT which may be brought forward...... Watch this space.

Serious stuff over. After the banana incident Mike decided with some encouragement from the nurses to make Velcade Wednesdays fruit and vegetable Wednesdays. Banana week was followed by carrot week 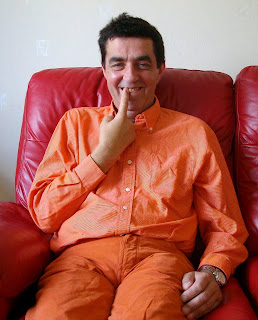 and then tomato week. 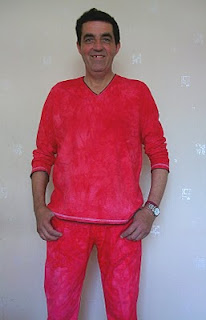 Tomato week was a failure (or as my girls would say a fail) as the dye turned his clothes more of a raspberry/pink.
Mike has decided that his next project is to see just how long and curly his hair can grow before it all falls out during his SCT. He's actually hoping that it grows to it's 1974 proportions and that when it returns after his SCT it is actually straight and not ginger. If it doesn't grow back straight, he says he's going to buy it a pink handbag.
Posted by Lorna A. at 12:07:00 pm 7 comments: Links to this post

Wierdest thing today. Was walking through Schuh in Bullring Shopping Centre with Lorna this morning, looking at all the best in proper shoes, when I looked, as you do, into one of the mirrors in the fixtures in the middle of the shop. Then I looked again and then even HARDER. "Where am I!" I whispered to myself. " I've disappeared, I can't see myself". Squinting my eyes and moving really CLOSE to the mirror....... OOPS! Why is that woman with the cleavage giving me a look of amazement? NOT a mirror....it's NOT a mirror!
Mike.
Posted by Mike at 5:05:00 pm 2 comments: Links to this post

Me and my big mouth

I spoke too soon it seems. Mike is still feeling fine but......... his blood tests yesterday showed too much potassium along with the ever present creatinine and urea, and they wanted to keep him in to monitor his heart over night. Mike decided there was no way he was staying in, so after a couple of things by IV he came home, having signed the form to say he had refused medical treatment. He did agree to return this morning for another blood test, which is where he is now.
Mike is still in good spirits however, as demonstrated by his choice of clothes for the day. I didn't get a chance to take a picture so you will have to make do with ones from our last holiday in Turkey. 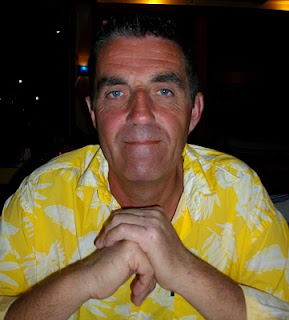 Now I'm sure you are all wondering about his reasoning regarding his wardrobe choice. Was it because the weather is so nice? Is it because he wanted to remember happier times? The reason is very simple:
Mike: I've got so much potassium I'm turning into a banana..........
Edit: Mike is safely home. He is no longer becoming a banana!
Posted by Lorna A. at 8:55:00 am 3 comments: Links to this post