Yes it's late, much later than I would usually blog, but I wanted to share with you all our evening. I have mentioned in the past I think that Mike recently got in contact with an old friend (also called Mike). They had been friends from the time they could walk into trouble but lost contact over 35 years ago. Over the last few months we've met up several times and enjoyed tales of scrumping, cricket games up walls, getting to (and back from) Weston-Super-Mare on £1 of petrol (3 gallons I'm told) and of course the ball hunting and storing. They collected up balls (their origin shrouded in intrigue) and kept them in a garden shed. The shed was so full they fell out and they had to block the windows up. 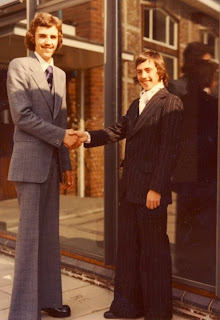 This evening the troublesome twosome along with their new sidekick (me) met up in Birmingham. We had a wonderful meal at Cafe Rouge and then wandered off around Birmingham trying to find some of their old haunts. Here is an interesting fact for you all. Back in 1974 a pub called The Tavern In The Town in Birmingham was blown up by the IRA. It was only by strange twists of fate that neither of the Mikes were there that night as it was their daily drinking hole. Spooky. Unfortunately it was closed this evening as we were going to pop in for a drink for old times sake. In the end we found a wonderful old building that used to be The Birmingham Joint Stock Bank (had both cows and sheep?) that had been turned into a marvellous pub and theatre.

All in all we had a fantastic evening. I am so very pleased that Mike's flight was delayed by a week. If it hadn't been put back, we would not have had this evening.
Posted by Lorna A. at 11:43:00 pm 2 comments: Links to this post