It would seem that Fabio Capello didn't get much of a birthday present yesterday, in fact as birthdays go I reckon it was probably one of those best forgotten. I have to say that all things considered it wasn't my best birthday ever either. Despite being staple free I'm still struggling with those unexpected coughs and sneezes, although the nausea seems to have subsided thank goodness. All in all I guess yesterday wasn't my best birthday, but I've had worse, at least despite not being my usual sparkling self, I have the love of a good man, and then of course there is Mike. Talking of Mike, we were just making plans on what to order from the Chinese take-away when Mike got a call from the hospital asking him to come in on Sunday evening ready for a kidney biopsy on Monday, so it looks like I'll be having the bed to myself for at least a couple of nights again!

So that covers the football and Fu Yung part of the title, so what about the feathers I hear you all cry. Well anyone of a delicate disposition might want to stop reading at this point. 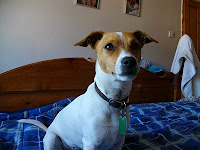 Toni doing her very best "Don't be mad at me face."

Well we'd finished eating our Chinese and Number 2 son had been off to buy candles (even though I said I didn't want any) so we were all waiting for cake and Toni then decided she needed to pop outside for a quick call of nature. Unfortunately she found a bit too much nature and before we could stop her, she found a fledgling blackbird on the floor which she tried playing with as she would any other toy. Sadly there was nothing we could do, by the time she'd been told to leave it, (and she dropped it immediately,) it was too late.
Posted by Lorna A. at 2:06:00 pm 5 comments: Links to this post